Monster Transmission Internship - A Monster-Tunity for the Future 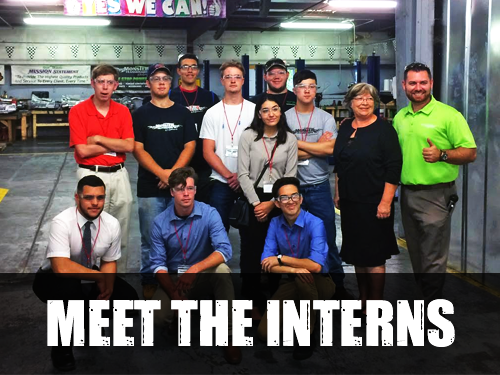 Monster Transmission recently gained some new helping hands. On June 5, ten new interns began their first day of work at Monster. This is the first time that Monster has taken on interns as hires, though if the program is a success there is the chance this could become a recurring theme for Monster. The program is being run through Pasco Hernando Career Source in Spring Hill, an organization responsible for the placement of over 80 interns into the workforce across both Pasco and Hernando counties this past year alone.

The interns have had to work hard to gain their place with Monster as the program began with 76 applicants and through a series of interviews and tests, the field was cut down to 11 elite standouts. From there, the selected participants were given more training to prepare them for holding a job in the Career Readiness Program held by Career Coach Glenn Anderson, Workforce Development Specialist Chris Mahan, and program manager Rachael Ginnick of Career Source.

The interns were pushed to the limit in this crash course as they completed two weeks worth of training in only four days to get them ready to start work the following Monday. Some of the requirements the interns had to fulfill in the program included a financial literacy course, mock interviews with members of the community, and additional testing to find their working style and leadership skills.

These “Monster-Tunity” interns and their departments they are working in are Stephen Skipper in the marketing department, Toni Rossi in videography, Tony Garcia in IT, Paul Scholz in client services, Isiah Nolasco in sales, Beck Hammett in shipping, Michael Crist and Ely Fryar in testing and teardown, Jami White Jr. in the build department, Eddie Castro in utility, and Gregg Foster in welding.

When asked about what he hopes to achieve during this internship opportunity, Tony said “I want to learn as much as possible during my time here. We are only interns for just under seven weeks, so taking on the technology side of Monster will be quite something of a task, but I am ready to show what I can bring to the table.”

Each of these interns have also been given a mentor at Monster, someone that will guide them and train them in their specific departments to perform their tasks to the best possible ability. One such mentor is marketing director Scott Griffin. "Being an online focused company our Marketing Department plays a very large role within Monster Transmission. To bring three specialized interns to our department is going to allow us to work on some of the ideas and concepts that we've had on the back burner. We're very excited to work side by side with them and learn from each other."

All of these new interns have at least moved beyond high school and are now looking to find experience in the vast ocean of employment. For someone fresh out of school, finding work can be difficult due to lack of experience, but thanks to Monster and Career Source, these 11 were given the opportunity to prove themselves to be capable employees, not only to Monster, but to other potential employers as well. We here at Monster are ecstatic to welcome these young minds to our family as we strive to give them the best experience possible in their time here.