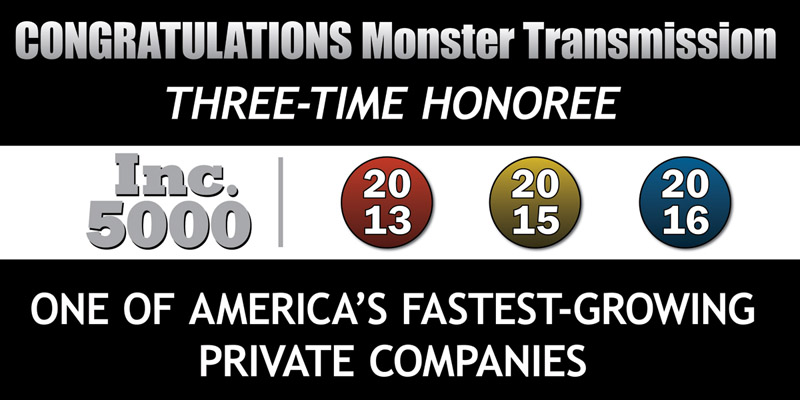 Monster Transmission and Performance has done it again! The company is pleased to announce that it has been selected as one of Inc. 5000's top US companies for 2016! The Transmission re-manufacturer, located in Brooksville, FL was a recipient of the award for the first time in 2013 and again in 2015. The Inc. 5000 list ranks the fastest growing private companies in America. These companies are considered to be the best run, most innovative, and most inspiring.

This award is extremely prestigious and is given based on the percentage of revenue growth over a period of four years. Companies on the list are based in the United States and are privately owned and independent. Along side Monster Transmission in receiving this esteemed honor are well known companies such as SEMA, Yeti, Dell, Facebook, Zappos, Papa Johns, Square, and Dollar Shave Club. Monster Transmission is proud to be in this national ranking of Inc. 5000 and was also awarded in 2012 for one of the 50 fastest growing companies in the state of Florida.

In addition, Monster Transmission is the only automotive company from Hernando County to ever be awarded this honor. Monster Transmission is known for their re-manufactured performance and heavy duty transmissions for cars and trucks around the world. They have been the favored transmission company for an astounding 18 different television shows including Fast and Loud, Gas Monkey Garage, Overhaulin, Two Guys Garage, GearZ, and Wheeler Dealers, and can be seen on renowned channels such as Discovery, Velocity, CNBC and SpikeTV. They have been featured in National automotive magazines such as Popular Hot Rodding, Super Chevy, Fast Fords and Mustangs, Hot Rod, and Chevy High Performance. To top it off, the Monster staff has volunteered hundreds of hours within their community and raised tens of thousands of dollars for local charities..

The Monster Transmission team has worked hard to build the recognition that has earned them a spot on the Inc. 5000 Inc. 5000 list. Monster Transmission is extremely proud of this honor and has recently acquired a new facility, nearly five times the size of their current location to accommodate the tremendous growth.